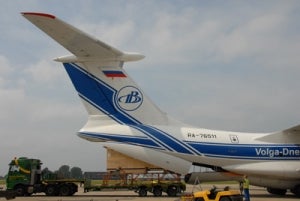 Volga-Dnepr Airlines has delivered an 11t oil and gas pump right to the door of a customer in the town of Farab, Turkmenistan.

The oil production unit was transported from Maastricht Airport in the Netherlands on behalf of the airline’s customer Agility Projects Rotterdam. The pump was packed inside a 2t wooden crate to protect it throughout its journey onboard one of Volga-Dnepr’s IL-76TD-90VD freighters and by road on arrival in Central Asia.

"Agility Projects Rotterdam asked us to not only organise the necessary permits for the flight to Mary International Airport but to also arrange the transportation of the oil and gas pump overland in Turkmenistan to Farab, where it is to be used," commented Alexander Kartashov, sales executive of Volga-Dnepr Airlines.

Azat Yakupov, senior engineer, dangerous cargo at Volga-Dnepr, added: "We didn’t have any difficulties loading the pump because we have been regularly carrying such oil and gas cargoes for customers for 25 years and have accumulated huge experience of delivering similar shipments. We loaded the cargo using a trailer and special cradles developed by Volga-Dnepr’s engineers to pull the cargo into the airplane using the aircraft’s rail system."

The pump unit was manufactured by the US organisation, one of the largest suppliers of industrial and environmental machinery.