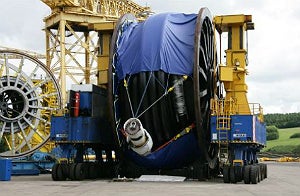 VESTAMID® NRG 1001, a high-performance polymer, can already be found in a total of more than 800 kilometres of pipeline. The polyamide 12 made by Evonik Industries has gone into the making of more than 400 unbonded flexible pipes to service the oil production industry. Oil companies have been using these pipes in their offshore projects for years now.

What has made the polyamide-12 moulding compound so popular are its superior properties over those of other polyamides used as barrier layers in flexible pipes. Together with Wellstream International Limited, Evonik conducted intensive testing to demonstrate compliance with the international norms API 17J for flexible risers and ISO 13628-2. The tests praised the creep performance, ductility, thermal expansion, methanol compatibility and hydrolysis resistance.

The moulding compound has since been used commercially for the manufacture of flexible pipes. Specially developed VESTAMID® NRG combines its technical advantages with extraordinarily consistent product quality, which ensures outstanding processability, thus reducing setup times, scrap and the risk of extrusion faults.

The new name, VESTAMID® NRG, stands for a whole range of polyamides — employed, most notably, in the energy sector. And that range includes VESTAMID® LX9020, a product which has been well established on the market for years.

For decades Evonik has been a leader in the development and marketing of high-grade polyamide compounds for line systems in motor vehicles. This high degree of expertise in the development of extrusion compounds has now been carried over to moulding compounds for the thick-walled piping systems which, thanks to their advantages over existing systems, are increasingly coming into use in the oil and gas sector.

High-performance polymers leader Evonik will be exhibiting products including VESTAMID® NRG and VESTAKEEP® PEEK at...

German-based Evonik Industries is one of the world leaders in specialty chemicals. We have been...

Evonik Industries has launched a medical devices project house with its main campus in Birmingham,...

DYNAVIS® Technology made its North American debut and its inaugural appearance at the CONEXPO-CON/AGG trade...