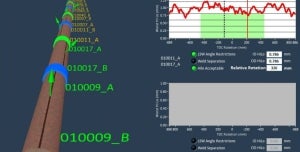 In addition to the sequencing of single pipe ends, the new software is now capable of sequencing multiple pre-welded sections of pipe (for example, doubles, triples and quads), while also providing improved visualisation of pipe fit-up and new, automated reporting features.

How does SmartFit work?

Winner of a Queens Award for Innovation in 2014, OMS’ SmartFit service is a system for managing pipe preparation and fit-up in readiness for welding prior to pipelaying. Used predominantly in the oil and gas industry, SmartFit ensures accurate fit-up of pipes prior to welding and laying in trenches, thus preventing environmentally damaging leaks.

Any problem pipes that won’t fit at a specified HiLo are also indicated and are re-sequenced or removed completely so that fit-up problems do not occur in the bead stall. Production delays due to mismatched pipes are avoided.

Experience shows that with typical flowline HiLo requirements, and using typical seamless line pipe that has not been counterbored, fit-up issues can occur regularly. For a HiLo of around 1.0mm to 1.2mm, problems are likely to occur every ten to 20 pipes for flowline / seamless pipe.

However, for fatigue-sensitive pipes (for example, in buckle zones), OMS can achieve a HiLo of 0.05. Using SmartFit enables the required HiLo’s to be achieved in the bead stall without trial and error. It also identifies up front problem pipe so that this can be removed from the pipe welding sequence, therefore avoiding any problems in the bead stall.

The latest version of the SmartFit software was developed by OMS in response to the changing needs of the oil and gas industry. Rather than weld single pipe ends, some of the latest pipelaying vessels are now designed and equipped to carry and/or weld multiple sections of pipe – in doubles, triples or quads.

"For the pipe contractor, this enables pipe ends to be part-welded into multiple sections onshore, which in turn means less time is spent welding individual pipe ends onboard the pipelaying vessel. This can significantly reduce vessel hiring costs and project risk."

SmartFit software is now more intuitive and easier to use, providing 2D/3D visualisation of pipe ends, which not only reduces operator error, but also aids the end customer or pipe contractor’s own understanding of the benefits of using pipe fit up optimisation software in order to reduce weld cut-outs and delays to the pipe welding and laying processes.

Nicolas Pellerej, software engineer at OMS and developer of the new SmartFit software states: "By utilising the 3D visualisation software feature within NI LabVIEW, SmartFit users can now visualise the actual sequence of pipe ends on-screen and then manipulate these, either as single or multiple pipe sections, in order to obtain the best possible fit up.

"By using different on-screen images, graphs, symbols and colours, we’ve made it easier for users to see the immediate effects of making modifications to a batch of pipes. For example, users can see instantly how changing the sequence or rotation of a pipe will affect the overall project HiLo, the separation or the long seam weld restriction for the project."

The SmartFit system is accurate, traceable to National Standards, light, fast to operate and highly portable. The system has been applied aboard a wide variety of pipelaying vessels and spool bases around the world.

Prior to OMS introducing SmartFit to the oil and gas industry, pipe fit-up problems occurred at a mean rate of one in every 15 pipe ends. Using SmartFit, such problems are rare or non-existent. OMS estimates that its customers are saving approximately £9m a year.