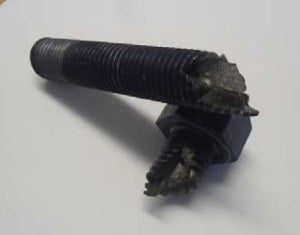 When Beck Prosper heard from a major oil company that a studbolt stamped with our trademark had snapped in service, it reacted immediately. The Beck reputation has been built up over many years of supplying high integrity bolting to the oil and gas and energy industries and the news of a failure in service is potentially disastrous to the company’s good name.

The contractor apparently believed that the studbolt was supplied from a defective material outside specification. However, the oil company’s own tests found that the chemical composition and mechanical properties were all within tolerances and the studbolt conformed to ASTM A193 B7. After additional tests, the company concluded that the studbolt had snapped due to over torquing, a common cause of studbolt failure.

Rather than be content with the absolution of blame, Beck Prosper decided this was a good opportunity to carry out an investigation and provide the oil company with a report of its findings. Indeed, the Beck Industries Group has started to become more involved in the tensioning side of the business for this very reason. Industry research is vital to the company and samples from studbolts exposed to the pressures of working are invaluable sources of information – even failed ones.

The parts supplied were 7/8in unc x 5.3/4in B7 studbolts coated in PTFE Xylan 1070. Beck’s laboratory and quality personnel took receipt of the items and set about analysing them, taking additional samples so that destructive tests could be performed. With much more equipment than simple ring gauges and go/no go gauges, the Beck Prosper quality department is now capable of in-house charpy impact tests, PMI, MPI, dye penetrant, spectrography, de-carb testing and tensile testing.

After a thorough analysis, Beck’s findings concurred with those of the oil company. The studbolt conformed to the ASTM A193 B7 standard and was well within tolerance on mechanical properties and chemical analysis. The root cause of the failure was over-tightening during assembly. This was conveyed to the contractor.

Beck Prosper is very proud of its development in the fields of quality control and testing. The rigorous new standards for components filter through into general day-to-day supplies, as well as subsea and nuclear parts.

Beck is well on the way to having in-house testing facilities accredited to BS 17025, enhancing customer service and streamlining the process of supplying bolting to global industries.

For more information, visit the ‘quality’ section of the Beck Prosper website.