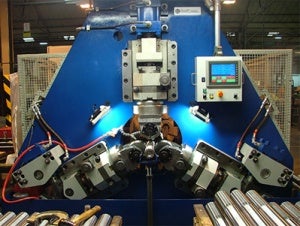 When this old machine turned up at Beck Prosper’s lovely state-of-the-art factory in Kingswinford, the vast majority of staff believed it was merely waiting to be collected by either the scrap man or the Black Country Museum. There were even suggestions we could paint it and exhibit it at the entrance to Beck Prosper as a commemorative monolith.

The machine was in fact the original thread roller as built by Prosper Engineering back at the end of the 1960s. The company was originally set up to build these machines with their innovative third rolling die which eradicated thread distortion on through rolling. The three dies went on to become the company logo and remained so until quite recently.

The above machine brought back many fond memories for the old guard from the Prosper days and they had a vision of restoring the machine to its former glory despite the scepticism of most. The Prosper people were aware of the capabilities of the machine, its quality and its speed and accuracy across the full range of diameters. It had once made components for an Australian power station; 9in double end studs threaded around 10in each end with an overall length of approximately 72in.

A decision was taken to refurbish this excellent machine as it was basically sound but in need of some tender loving care and modernisation.

In March 2013 after a couple of weeks away the behemoth returned. It now sits proudly in the middle of the production area, fired up and ready to go. It is the latest addition to our bank of three plunge rolling machines to cover all diameters from 0.25in to 7in plus, and is currently earmarked for a job in the nuclear industry now it has been tested and proved.

Some of the staff are unsure whether it is even the same machine!

With its capacity of 120t it is capable of plunge and thread rolling and can roll various heavy thread forms, such as ‘acme’, ‘buttress’, etc.

Beck Prosper, as Prosper Engineering before us, make our own rolling dies and this ensures that only quality appropriate dies are used on a quality machine which adds up to the end user receiving quality components. The value of the machine to the company in its first year alone will see estimated savings on previously sub-contracted work of around £200,000.

There’s many a good tune played on an old fiddle!