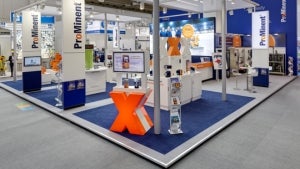 At the end of this year’s ACHEMA, Ralf Kiermaier, vice-president sales and marketing at ProMinent Group, was very pleased with the way things went at the trade fair: "Our stand attracted a lot of visitors from day one. We had a large number of promising discussions with some very interested visitors. Over the five days of the event we were visited by around 800 customers and other interested parties. About 40% of them were from other countries."

As expected, the focus of visitor interest was on the two new metering pumps. The newly developed Solenoid Driven Metering Pump gamma / X and the Orlita® Evolution range of Process Metering Pumps were unveiled for the first time in Frankfurt. Orlita was of particular interest to visitors representing the oil and gas industry and the chemical industry.

Safety, reliability and convenience play a key role in the new gamma/ X. Its special feature is the pioneering solenoid control technology, which functions without the need for additional, often fault-prone sensors. The pump uses the current energy demand to determine the back pressure in the pipeline, automatically calculates how much power it needs, and immediately adapts its performance to the pressure situation. The pump detects deviations from the specified metered quantity as well as problems in the metering process caused by hydraulic faults.

Another special feature is the new operating concept of the gamma/ X. The designers developed a solution which is consistently adapted to the user. The high-resolution display, layout and structure of the operating menu, four central buttons and convenient click wheel ensure intuitive operation and programming of the solenoid pump. One key customer requirement for optimum operational monitoring was met by the unconventionally positioned status LEDs at the top of the front panel, which are also easy to see from above and behind. The pump’s optional modules can be connected at the front, which not only improves accessibility but also removes the interfaces from areas that could come into contact with chemicals in the event of a leak.

During installation and maintenance the pump can be easily released and moved back into position with one action thanks to the new foot bracket. The new solenoid metering pump gamma / X is designed to meter liquid chemicals at between 1ml/h and 45l/h at a back pressure of 25bar to 2bar.

The modular Hydraulic Diaphragm Metering Pump Orlita® Evolution features new diaphragm position control and continuous oil chamber bleeding. This results in a very high degree of process reliability and reliable protection against non-permitted operating conditions. The single and multiple pump versions of the Orlita® Evolution form a new, integrated product range with stroke lengths of 15mm to 40mm. Four pump sizes cover a capacity range from 3l/h to 7,400l/h at 400bar to 10bar. In multiple pump systems, up to five metering units can be combined, even units with different pump capacities.

"Many of the visitor contacts were very valuable because they often related to concrete projects," says Kiermaier.

"This means that our sales team in Germany and abroad will be kept busy over the coming weeks and will efficiently process all the enquiries received – that after all is the whole point of attending ACHEMA!"

He concludes: "All in all, ACHEMA 2015 was a complete success for ProMinent thanks to the hard work of our team. Our expectations of this key event for the chemical and process industry were fully met!"

ProMinent will be demonstrating its effective disinfectant solutions for bottler injection systems, CIP applications and...

ProMinent is presenting components and systems it has developed and manufactured in-house at BrauBeviale 2016...

The founder and chair of the supervisory board of ProMinent GmbH, Prof. Dr. H.C. Viktor...