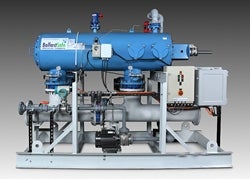 Leading designer and manufacturer of precision air-moving equipment The Gast Group has supplied its Atex-approved air motors for use in areas where there is potential for explosion to self-cleaning mechanical seawater filter company Filtersafe.

The business is growing and has recently addressed the introduction of a new standard which makes it compulsory to filter and treat the water which is loaded in the vessels and used as ballast to remove harmful aquatic organisms and pathogens and avoid spreading them around the oceans.

Electric and pneumatic motors are available on all Filtersafe® products to drive the units’ suction scanners however, when installed on gas/oil tankers, the filters use air motors to move the self-cleaning system on the filter screens, as electric motor cannot be used in these intrinsically safe areas.

"Gast pneumatic air motors were specified because we are based in Israel and Gast has an agent here, so communications are good. We worked with their authorised distributor Dusar Engineering & Supply and were able to check the product locally, which was very convenient. The results of our tests were positive so we decided to specify the Gast motors, and ordered them locally, too."

The Gast pneumatic motors are used to operate the cleaning system for the screens in Filtersafe Atex approved filters, whether they are single-screen or multi-screen units. Every screen has its own motor, which rotates a dragline that scans the screen from the inside in a spiral motion. With over 60 years experience in the automatic filtration industry, and over 10 years specifically in ballast water treatment, Filtersafe’s innovative design brings unrivalled economy, value and performance to seawater filtration.

Gast Group’s compact, lightweight air and gear motors are known industry-wide for their rugged construction and reliability and are used for a variety of industrial and manufacturing applications. Non-lubricated air motors are available in four basic models and oil-lubricated versions in seven basic models and all are available with ATEX (T4) approval. Their non-electrical operation means they are classed as intrinsically-safe in hazardous environments, which reduces the possibility of explosion from the ignition of flammable gases.