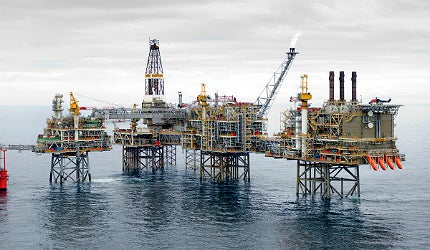 Declining output from North Sea oil production streams is sending oil prices through the roof. At the time of writing, Brent stood at more than $113 a barrel, with analysts warning that further price hikes will follow when oil field maintenance begins in September.

Jette (formerly Jetta) field is located in blocks 25/7 and 25/8 of production licence 027 D in the Norwegian North Sea.

Production has already dropped by 12% in 2012 due to a delay in loadings of Oseberg crude - one of the four oil crudes which set the Brent benchmark - in July and August, when oil workers in Norway downed tools.

But in September, the supply of Forties crude, the largest stream and the most important for setting prices, will hit a record low when Nexen closes its Buzzard field for maintenance.

Carl Larry of Oil Outlooks in New York fully expects Brent prices to continue to rise as maintenance starts. "I think that these rising prices in the Brent stream are coming right along with other fundamental issues causing prices to rise, such as the Iranian sanctions and recovery plans from the EU and perhaps China," he says.

Elsewhere in the North Sea, Statoil is scheduled to load five cargoes of Troll crude this month, down from 14 in August, as the company also begins repair works. Gullfaks, another Norwegian crude, is also scheduled to fall by one cargo to four cargoes in the same month.

"The shortfall in North Sea production should to be temporary, and traders expect pressure to ease."

With volatile prices relying on a handful of declining fields, does the oil industry need to look for other ways to benchmark offshore assets?

"I think that we're going to have to start to face reality about the way we are pricing this Brent stream," says Larry.

"The declining production rate and the continuing loading issues have been pricing this benchmark out of the realm of sensibility. It's hard to imagine that the world's largest consumer has a benchmark for oil prices that is $20 under the rest of the world."

"The rising prices from Brent over a crude like WTI has moved beyond demand and is now focused on the supply issues. It's from here that even if maintenance in the Buzzard field is brought back to a level of sustainability that we can see other fields in decline," Larry adds.

The shortfall in North Sea production should to be temporary, and traders expect pressure to ease after the maintenance work is completed.

Natalie Robertson, an analyst at ANZ in Sydney, told Reuters on 20 August, when the price of Brent peaked at $114.26 a barrel: "Brent has been supported by the ongoing disruption in North Sea supplies, but they are expected to ease in the coming months, which could dampen prices."

But Larry fails to see why oil companies would invest in declining fields in the North Sea. "The current maintenance can be likened to the US refining system. We all know that there is a need for further upgrades, but putting more Band-Aids on the problem is not going to make a difference in the end," he says.

"There are more profitable production projects in Canadian oil sands, US shale plays and still untapped shale plays in other foreign countries. I think that any conflict in Iran would also ring a death knell for the North Sea."

The strike in June by Norway's oil and gas workers about pension reforms was estimated to have cost the nation £300m in lost production.

How Covid is creating an age based unemployment gap in US

23 Oct 2020
Registration is disabled.
We use cookies to ensure that we give you the best experience on our website. If you continue to use this site we will assume that you are happy with it.ContinueLearn more