160km east of the Shetland Isles

Expand
The Bentley oil discovery is located in block 9/3b in the North Sea, 160km east of the Shetland Isles on the western edge of the Viking Graben. The block is more than 200 square metres.
The Bentley reservoir contains around 160 million barrels of recoverable oil.
Bentley oil field is expected to be put into commercial production in 2013. 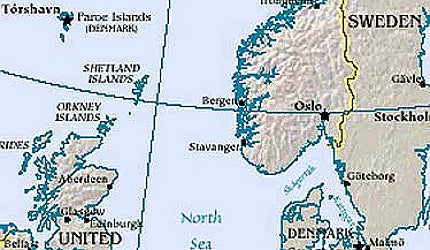 Bentley oil discovery is located in block 9/3b in the North Sea, 160km east of the Shetland Islands on the western edge of the Viking Graben. Xcite Energy Resources (XER) has a 100% interest in the block, which covers an area of more than 200 square kilometres. The block was awarded to XER in October 2003.

“BP signed a contract with XER in January 2010 to market and distribute the crude oil extracted from the Bentley field.”

As per the 2D seismic study, two structures within the block – 9/3-1 and 9/3-4 – established accumulations of heavy oil: these make up the Bentley field.

The reprocessed 3D seismic survey was interpreted by the company in 2009. Commercial production from the field is expected to commence in 2013.

BP signed a contract with XER in January 2010 to market and distribute the crude oil extracted from the Bentley field.

In June 2012, EXR secured a loan of $155m from a consortium of five banks, including the Royal Bank of Scotland and Societe Generale Corporate & Investment Bank. The loan has a term of five years and will be used for the development of the Bentley oil field.

The Bentley field’s oil is found in the Dornoch Formation of the late Palaeocene age. Block 9/3b is located at the eastern margin of the Palaeocene Shelf.

The formation within the block consists of rough clastics, which further lead to the formation of a prograding delta compound across the eastern boundary of the east Shetland Platform. The main rock is the Kimmeridge Clay Formation (Upper Jurassic) and is encountered within Viking Graben to the east of the block.

Drilling at the North Sea field

The Bentley field was discovered through the drilling of three wells, 9/3-1, 9/3-2A and 9/3-4; however, due to the uncertainty of fluid properties, the impact on flow rates and commerciality, another appraisal well was drilled in 2007 to identify the commercial prospects of the field.

“Bentley oil discovery is located in block 9/3b in the North Sea, 160km east of the Shetland Islands.”

The 9/3b-5 appraisal well was spudded in December 2007 and drilled to a total depth of 4,105ft. The well found heavy oil-bearing Palaeocene Upper Dornoch Formation sands at 3,712ft, with an 87ft gross hydrocarbons column. During drill stem testing, 100% crude oil was reported at rates of up to 150 barrels of oil a day from a 50ft section of the oil column that had been successfully penetrated. The reservoir found was of high porosity and permeability unconsolidated sandstone.

In September 2010, the 9/3b-R well was spudded by the Ocean Nomad semi-submersible drilling rig. XER completed the pilot section of the 9/3b-6 appraisal well in October 2010. The well encountered a 113ft oil column in the Dornoch Reservoir. The pilot section was plugged and abandoned, and work on the horizontal side track, 9/3b-6z, began. In December 2010, the side track was suspended for use as a future production well.

Drilling permission for 9/3b-7 and 7Z wells was granted by the Department of Energy and Climate Change (DECC) in March 2012. Well 9/3b-7 was spudded the same month and the drill depth target of 9,646ft was completed in June 2012.

Bentley field is being developed in a phased manner. Phase 1A was completed in October 2012 with around 147,000 barrels of Bentley crude oil being produced. The 9/3b-7 and 7Z wells were suspended for use in phase 1B, which came on stream in 2013. Phase 2 is expected to begin operation in 2016.

As per the production plan, four horizontal production wells and two vertical water injection wells will be drilled from the jack-up rig.

Fluid processing and water separation processes will be carried out onboard the jack-up rig by the production module, which was purposefully developed.

Extraction of the heavy oil requires special skills and equipment. The oil produced will be transferred to and stored in a moored tanker for further offloading to a shuttle tanker. It will then be transferred to large cargoes for transporting to specialised heavy oil refineries, such as Humberside, Mongstadt and Rotterdam.

Fugro Services carried out the drilling and testing of a horizontal production well as part of a contract signed in October 2009.

Applied Drilling Technology International was given the letter of intent in February 2010 to provide the Ocean Nomad semi-submersible drilling rig for drilling and testing of the 9/3b-R well.

Under a contract signed in February 2010, AMEC facilitates the operator in demonstrating the reserve potential of the field and bringing the field into production.

In December 2010, XER signed a letter of intent (LOI) with British American Offshore (part of Rowan Companies) to supply a deepwater jack-up unit, called Rowan Norway, for the field’s development. The vessel was delivered to Rowan Companies by Keppel FELS shipyard in July 2011.

In March 2012, XER gave a LOI to Ocean Installer to lay two oil transmission pipelines of 1.3 miles long each from the Rowan Norway jack-up rig to a shuttle tanker.

East Rochelle oil and gas field is located in Block 15/27 of the Greater Rochelle area (production licence P226) in the UK section of the North Sea. It lies about 72 miles away from the UK coastline in the central North Sea.