Expand
1. The Columbus gas field is located in Block 23/16f in the UK sector of the central North Sea.
Situated about 150 miles east of Aberdeen, the condensate-rich gas field contains recoverable reserves of 130.9 billion cubic feet of gas and 4.9 million barrels of condensate.
Serica Energy revealed the Columbus discovery well in October 2006.
The 23/16f-11 discovery well flowed at an average of 17.5 million standard cubic feet of gas and 1,060 barrels per day of condensate during a production test.
Development drilling for the CDev-1 production well at the Columbus gas field is scheduled to start in 2020.
A schematic diagram of the Columbus field showing pipeline and umbilical installation. 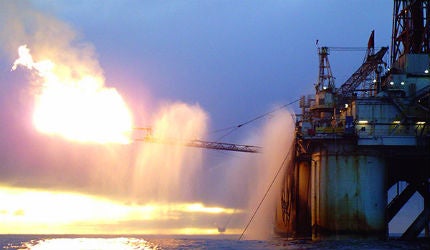 Columbus is a condensate-rich gas field located primarily in Block 23/16f, which covers an area of approximately 20 square miles (51.8km²) in the central North Sea in water depths of 85m.

A portion of the field also extends into Block 23/21.

The Columbus field is located about 230km east of Peterhead, Scotland, and approximately five miles (8km) west of the British–Norwegian median line.

Serica Energy UK is the operator of the field and currently holds a 50% stake, while remaining is equally owned by Endeavour Energy UK and EOG Resources United Kingdom.

The field is estimated to have maximum recoverable reserves of 130.9 billion standard cubic feet of gas and 4.9 million barrels of condensate.

First production from the field is anticipated by the second quarter of 2021 and the field life is expected to be around 14 years.

The Columbus development project is expected to have a peak production of 337 million cubic metres of gas per year and 82,177 cubic metres per year of condensate.

Serica Energy won the 23/16f concession block in 2005 during the 23rd offshore licensing round.

The Columbus discovery was made in October 2006 via the exploratory well 23/16f-11. The natural gas was found in the Palaeocene Forties sands.

The discovery well was drilled to a total depth of 3,083.3m and encountered a gross gas column of 38.1m.

It flowed at an average rate of 17.5 million standard cubic feet of gas during a production test carried out with a wellhead pressure of 1,200psi.

The well was drilled by Sedco 704 and encountered a net pay of 12.1m in the Palaeocene sands.

The appraisal well was sidetracked by the 23/16f-12z well to further evaluate the discovery.

A chemical injection umbilical connecting the Shearwater platform to the Columbus wellhead is scheduled to be laid along with the Arran to Shearwater pipeline.

Processed gas will then be compressed and exported to the St Fergus terminal via the Shell Esso gas and associated liquids (SEGAL) system, while the processed condensate will be shipped to the Forties pipeline system (FPS) via the Graben area export line (GAEL).

The well will have length of nearly 6,608m and a total vertical depth of 2,986m. It is scheduled to be completed in 79 days.

The subsea infrastructure at the Columbus field is expected to have a design life of 15 years.

The pipeline and chemical injection umbilical will be laid in two separate trenches.

The pipeline will be buried with backfill soil, while umbilical will be left in an open trench to allow for natural backfilling.

Furthermore, a mattress protection and rock dumping will be formed to integrate the subsea infrastructure at certain locations.

Dynamically positioned (DP) or anchored vessels will be used for installation of the subsea equipment.

“The proposed Columbus development well, designated CDev-1, is expected to be drilled during the initial phase of field development and spud by the fourth quarter of 2020.”

The Columbus field’s subsea tie-in structure will be installed using a Dive Support Vessel (DSV), which is also expected to provide support for the field’s tie-in and pre-commissioning activities.

The proposed Columbus development well, designated CDev-1, is expected to be drilled during the initial phase of field development and spud by the fourth quarter of 2020.

Installation works for the pipeline and umbilicals is expected to be performed in the second and third quarters of 2020, while the installation of the subsea infrastructure, along with its hook-up and commissioning activities, are slated for the second quarter of 2021.