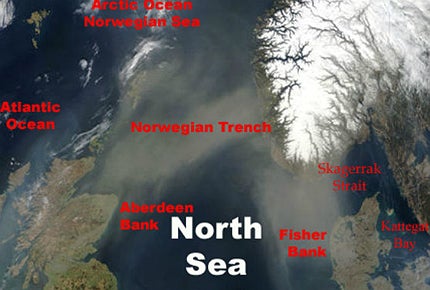 Causeway oil field is located in blocks 211/22a and 211/23d of production licenses P.201 and P.1383 of the northern North Sea, UK. It lies in a water depth of 492ft. The field is situated approximately 93 miles east of the Shetland Islands and 13.6 miles west of the UK / Norway international boundary.

The field is being developed along with the Fionn oil field. The two fields are estimated to hold maximum recoverable reserves of 10.42 million barrels.

Causeway was anticipated to come on-stream in September 2012, but was delayed due to bad weather conditions in the North Sea. The field is now scheduled to commence initial production in November 2012.

Valiant Petroleum, through its subsidiaries Valiant Causeway and Valiant Gamma, controls a majority 64.5% working interest in the Causeway project and is the operator of the field. The remaining 35.5% share is owned by Antrim Resources, a wholly owned subsidiary of Antrim Energy.

As per an oil sales agreement signed in August 2012, BP will purchase Antrim’s share of oil produced from the project.

Development of the North Sea field

The final field development plan (FDP) for the Causeway project was submitted to the UK Department of Energy and Climate Control (DECC) in August 2011. The development scheme was sanctioned in December 2011.

"As per an oil sales agreement signed in August 2012, BP will purchase Antrim’s share of oil produced from the project."

The Causeway field will be initially exploited through two wells. One of these will be a production well and another will be utilised to inject water. Both wells will be tied-back to the North Cormorant platform operated by Taqa Bratani. The wells are planned to be drilled through a semi-submersible drilling rig.

The production well will be tied-back to a subsea manifold through a 1.8-mile long infield flowline. From the manifold, the reservoir fluid will be transported via a 9.7-mile subsea pipeline to the host platform for processing. The processed oil will then be sent to the Sullom Voe terminal for distribution.

A 9.3-mile long water injection pipeline and associated electro-hydraulic control umbilical with conduits for chemical injection will also be installed. As of October 2012, all subsea construction work was completed. Commissioning of the topsides at the host platform is being carried out.

A submarine pipeline plough was used to entrench the production flow-lines, water injection pipeline and the umbilicals. The leftover trench was mechanically backfilled.

GE Oil & Gas was contracted in September 2011 to supply subsea production trees, a subsea injection tree and rental tooling for the project.

Technip was awarded a lump sum contract to provide engineering, procurement, installation and commissioning of rigid and flexible pipelines, subsea equipment and umblicals.

Devenick gas field is situated in Blocks 9/29a and 9/24b of the UK Continental Shelf (UKCS) in the central North Sea, in water depths of 116m.

Blackbird oil and gas field is located in Block 20/02a, in the UK section of the central North Sea.

Wingate is a shallow water gas field located in Block 44/24b of the British Continental Shelf in the southern North Sea.