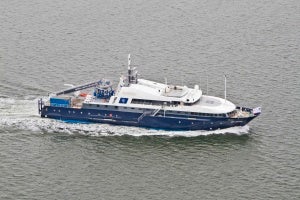 17 May 2013 will certainly be remembered for its outstanding atmosphere during the naming ceremony of the DP Gezina at Holland Shipyards’ premises in Hardinxveld – Giessendam, despite the heavy rain on the day.

The naming of the DP Gezina was performed by Gezina Roelofs, and witnessed by the 200 guests attending the event. Gezina Roelofs is the mother of the owner of Chevalier Floatels, Marcel Roelofs.

During the conversion the vessel was lengthened by 9m and sponsons were added to improve the sea keeping and make the vessel more comfortable for those onboard. Internally, the vessel was completely changed and is now capable of accommodating 60 to 90 persons in its state-of-the-art accommodation facilities.

Technically, the vessel was equipped with an additional machinery room to house the Ampelmann system and two additional generators. The generators provide power for the additional loads required to meet the requirements of DP2 notation and the equipment required for the vessel to fulfill its intended role. This equipment includes a retractable bow thruster for the DP2 requirements and an Ampelmann crew transfer system.

With the added machinery room, additional bow thruster and increased generator capacity the vessel been able be equipped with a DP 2 system and consequent class notation.

The Ampelmann system allows for a significant improvement in operational time and scope compared to more conventional transfer methods. Where other systems are limited to wave heights of 1.5m, the Ampelmann has the capacity to work in wave heights up to 3m, thus greatly increasing productivity in the field.

On the aft deck a heave compensated work crane has been fitted, with capacity of 1t at 20m outreach for servicing offshore installations. Also the vessel has been equipped with the facility to accept a multibeam sonar, thus allowing for works such as cable inspections.

After a relatively smooth building period for 6 months, the vessel has already secured its first charter, and the market is responding positively. Looking to the future, DP Gezina’s sister ship is currently being converted by Holland Shipyards to serve the same market.