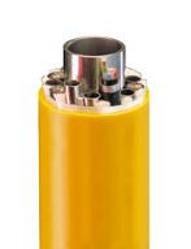 Worldwide cable industry expert Nexans has been awarded a €8 million contract by Statoil to supply static umbilicals for the Gullfaks Rimfaksdalen project in the Norwegian North Sea. This is the fourth Statoil project in quick succession to feature the new standardised fast-track umbilical design developed by Nexans, following contracts awarded in 2012 for the Oseberg Delta field in the North Sea, the Snøhvit gas field in the Barents Sea and Smørbukk Sør in the Norwegian Sea.

Nexans umbilicals chosen by Statoil for Gullfaks Rimfaksdalen gas project in the Norwegian North SeaNexans’ specialized facility in Halden, Norway will manufacture a total of 9km of static umbilicals to be deployed at water depths of around 137m to provide the subsea tie-back between the Rutil and Opal gas discoveries and the existing Gullfaks A platform. Statoil’s new standardized umbilical design, that integrates hydraulic, data and fibre optic services, is ideally suited to this project, as it has been developed specifically by Nexans to provide a consistent and cost-efficient solution for fast-track projects, such as tie-ins to existing infrastructure, as well as other kinds of subsea oil and gas projects.

"Winning this fourth standardized umbilicals contract for Statoil confirms the success of this design in both reducing project costs and lead times, as well as increasing the repeatability of engineering, procurement and fabrication", says Krister Granlie, Vice President Hybrid Underwater Cables Division, Nexans Norway. "It is a perfect example of the fully flexible and comprehensive approach we offer for our subsea customers, with solutions ranging from standardized designs to bespoke umbilicals purpose designed for specific requirements."

The main Gullfaks field lies in the northern part of the Norwegian North Sea. It has been developed with three large concrete production platforms: Gullfaks A platform began production in 1986, with Gullfaks B following in 1988 and the Gullfaks C platform in 1989. Produced oil is loaded directly into shuttle tankers on the field, while associated gas is piped to the Kårstø gas treatment plant north of Stavanger and then on to continental Europe.