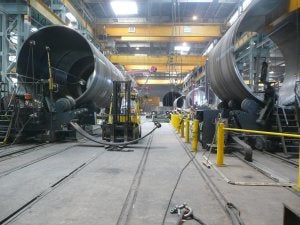 G&G International has succeeded in penetrating the demanding offshore windmill market as a new arrival. PEMA Assembly Lines have been in a key role in their first major project where G&G delivered 30pcs of transition pieces weighing approximately 250t to Doorbraak wind farm in Germany.

G&G’s successful delivery has already led to another contract with Idesa of Spain, under which G&G will deliver 72 transition pieces to the Northwind offshore wind farm project, a new wind farm on the Bank Zonder Naam, 37km off the coast of Zeebrugge.

Belgian-based Northwind has placed an order worth €48 million for the production of steel transition constructions for its offshore wind turbines. G&G International is taking the lead for this order, in a joint venture with GI WindForce, set up with Idesa, to supply these at the start of 2013. G&G International will construct 40 of the 72 transition pieces, with Idesa constructing the remaining 32.

"We chose PEMAMEK for a supplier of our new welding automation systems based on technical analysis, which clearly stated that PEMA is the most qualified and technically advanced solution for our purposes," Mr. van Melis continues. "This has been proven to be true also in practice, and assembly lines have been working reliably and effectively for the whole process of the project. The assembly line reduces the risk of possible damage of work pieces when lifting, and increases the quality of the product."

Mr. Dieter Verstraeten, production manager of G&G International, emphasises that: "PEMA assembly line is special due to the self-aligning construction and versatile functions with comparison to earlier tested equipment. With PEMA systems we can assemble effectively both cylindrical and even 4 degrees of conical constructions that occur in transition pieces in particularly."

Welding and Production Automation Solutions for Oil & Gas and Process

Over four decades of experience in production and welding automation has given us unparalleled insight...

The PEMA nozzle welding solution is a system created to improve the efficiency of pressure...