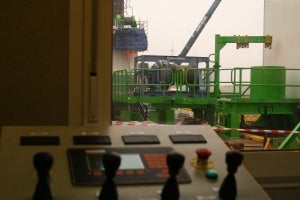 In the Baltic Sea, a wind farm comprising 64 wind generators has been built. The water depths vary from 20m to 40m. The project began in August 2013 and was successfully completed in April 2014. All hydraulic installations were carried out using equipment by Hydrauvision Rental.

When the wind generators are placed on the tripods, it is important to anchor these firmly into the seabed. In addition, they should be perfectly level. To ensure this, Hydrauvision has developed an advanced tracking system. This is a fine example of the synergy that exists between our divisions.

Main contractor Hydrauvision Rental, supplier of winches and powerpacks, has contracted out parts of the job to Hydrauvision Services and Hydrauvision Piping, who carried out the installation. The rental fleet, of course, has been developed and manufactured by Hydrauvision Systems.

The system consists of a driven frame, also called a template, which is suspended from the jackup by means of cable winches. During transport, the template is pulled up against the bottom of the jackup by means of three 80t winches. Three uprights precisely fit into three recesses in the bottom of the jackup. To fix the template during transport, each winch is secured with a pulling force of between 30t and 70t, depending on the position.

Once on location, the template is lowered to the bottom of the sea by means of the tracking system for the three winches. From the control room, finetuning is carried out for each winch in order to achieve a perfectly horizontal position of the template. The template itself is provided with a levelling system with 16 underwater cameras to monitor the whole process. The whole system contains two ring lines with hydraulic oil.

Considering the fact that the pulling force of our rental winches differ each time, the...

An extensive gas field has been discovered off the North-West coast of Australia, in the...

HydrauRent is introducing the latest expansion of its rental fleet: the HydrauSupport 2000FS. This luxury...