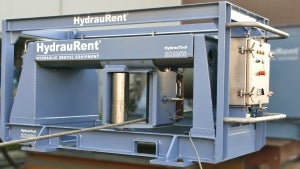 Considering the fact that the pulling force of our rental winches differ each time, the mechanical winding method, by means of a grooved spindle construction, whereby the cable is wound by means of a parallel movement from left to right and vice versa, is not suitable. That is why we have developed the new HydrauTool Spooler 25/50 winch spooler. It is used to evenly wind a winch cable across the full width of a drum.

Not only do the cable diameters differ, the pulling force varies greatly as well. Hydrauvision Rental has a series of winches, from several tons of pulling force up to the 80t versions. An advanced winding system was therefore needed.

The new spooler is electronically controlled. According to DIN standards, the fleet angle may not exceed 2°. This was also practice-inspired. The guidance consists of a cell comprising two rollers and a feeler. This electronic feeler measures the angle and ensures that the cell moves more or less according to the desired angle.

The spindle is in-between the two rollers and is hydraulically driven. The HydrauTool Spooler 25/50 was specifically made for the Hydrauvision Rental 25t and 50t winches with the same footprint, including the connections and standardised. The spooler frame is a crash frame, for example, a protective frame and DNV2.7-3 tested (lifting in offshore).

Striking detail: The spoolers can also be connected to ‘other’ winches, on the condition that the size will approximately match. In short, the new spooler is multifunctional. Normally, a maximum angle of 17° is used with the full pulling force of a 50t winch but, depending on various factors, an angle of 30° can be used for smaller pulling forces on the cable.

In the Baltic Sea, a wind farm comprising 64 wind generators has been built. The...

An extensive gas field has been discovered off the North-West coast of Australia, in the...

HydrauRent is introducing the latest expansion of its rental fleet: the HydrauSupport 2000FS. This luxury...