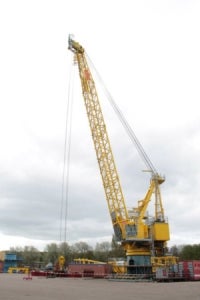 Following its successful installation and commissioning at the Jurong Shipyard in Singapore, two EHC 100/4000 boom hoist cranes are handed over to Seadrill for the West Rigel semi-submersible.

Specialising in custom made and fit-for-purpose hoisting and lifting equipment, Kenz Cranes designed and built the two cranes in the Netherlands according to the highest Norwegian standards DNV 2.22/Norsok R002 and EN13852-1.

As Kenz Cranes is one of the few suppliers able to deliver according to these standards, the company is chosen as manufacturer of the cranes which will be operational on the Norwegian continental shelf.

The cranes are designed with a strong focus on low and easy maintenance, safety and reliability which were facilitated by, among others, the usage of redundant load cells, power packs and cameras.

Both cranes have been manufactured and fully function / load-tested at the production facility in Zaandam, the Netherlands. All crane modules have been specially designed to fit on 40ft flatbeds, which is a big advantage for global transportation. Due to the fact the crane modules are containerised, all global ports can be reached easily.

The two West Rigel Kenz cranes have been assembled at Jurong Shipyard where they have been successfully installed and load tested under supervision of DNV on the West Rigel drilling rig. The Petroleum Safety Authority (PSA) subsequently released the cranes for use.

Kenz Cranes is a well-known designer and manufacturer of cranes and related lifting equipment for the offshore industry. Using our in-house production, testing, commissioning and...

The offshore division of the Kenz Figee Group is the forerunner when it comes to the design, manufacturing and maintenance of hoisting and lifting systems.