15 to 20 million barrels of oil equivalent

Expand
First gas from Atla Field was produced in October 2012.
It lies about 20km away from the Heimdal field, in water depths of 119m (393ft).
Atla is estimated to contain 11 million barrels of oil equivalent. 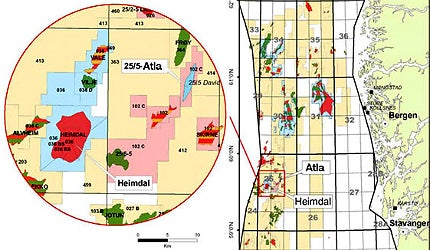 Atla gas and condensate field (formerly known as David) is located in block 25/5 of the southern North Sea, Norway. It lies about 20km away from the Heimdal field, in water depths of 119m (393ft).

Total E&P Norge holds a 40% interest in the field and is the operator. Other licensees include Petoro (30%), Centrica Resources (20%) and Det norske (ten percent). The field development cost was NOK1.3bn ($231.8m).

First gas from Atla Field was produced in October 2012. An estimated 14,000 barrels of gas and 2,500 barrels of condensate are expected to be produced from the field in 2013.

A wildcat well was drilled in October 2010 as part of the drilling programme. The well led to the discovery of the David prospect, which was later renamed as Atla. It terminated in the Hegre formation of Triassic age and encountered a 230ft (70m) gas column.

Production testing was not carried out for the well but extensive data was gathered and sampling was carried out.

Another wildcat well was drilled with the primary target of proving hydrocarbons in the Middle Jurassic reservoir rocks or the Brent formation. The well encountered a good quality reservoir located at a depth of 2,700m.

The secondary target of the well was to prove hydrocarbons in the Lower Jurassic reservoir rocks or the Statfjord formation. The formation was water bearing but had good reservoir properties.

Development of the Atla field was fast tracked by Total. The plan for development and operation (PDO) was submitted to the Ministry of Petroleum and Energy in July 2011. The PDO was approved in November 2011.

Existing infrastructure at the Heimdal field is being utilised which enabled the discovery to be realised quickly and more economically.

The discovery well drilled in October 2010 was converted into a production well. It is connected to a subsea installation at the field, which in turn is tied back to the Skirne / Byggve subsea template. Gas depletion is being used to recover the hydrocarbons.

The Skirne / Byggve subsea installation is connected to the pipeline between the Heimdal and Skirne fields. The recovered gas and condensate is sent to the Heimdal field for processing. Total operates the Skirne field, whereas Heimdal is operated by Statoil, with Total as a partner.

Borgland Dolphin semi submersible rig was used to carry out development drilling at the Atla field. The rig commenced drilling of the sidetrack production well, 25/5-D-1-H, in June 2012 and completed it within a month.

Ocean Vanguard is a Bingo 3000 type drilling facility built in 1982. It is operated by Diamond Offshore Drilling Netherlands.

Borgland Dolphin is an Aker H-3 type drilling facility built at Harland & Wolff in Northern Ireland in 1977. It is owned by Borgland Dolphin and operated by Dolphin Drilling.

Subsea 7 was awarded a $75m contract in November 2011 for the engineering, procurement and installation of a seven kilometre, 9.3in diameter flexible flowline. The flowline is installed between the existing pipeline, located between Byggve and Heimdal.

Jette (formerly Jetta) field is located in blocks 25/7 and 25/8 of the production licence 027 D in the Norwegian North Sea.

The Blane oilfield is located in block 30 / 3a and Norwegian block 1 / 2 in the southern part of the North Sea.

The price of Brent crude is rocketing as production in the North Sea declines. With maintenance works due to start at Nexen’s Buzzard field, Offshore-technology.com questions whether the industry should rely on Brent as a global benchmark.