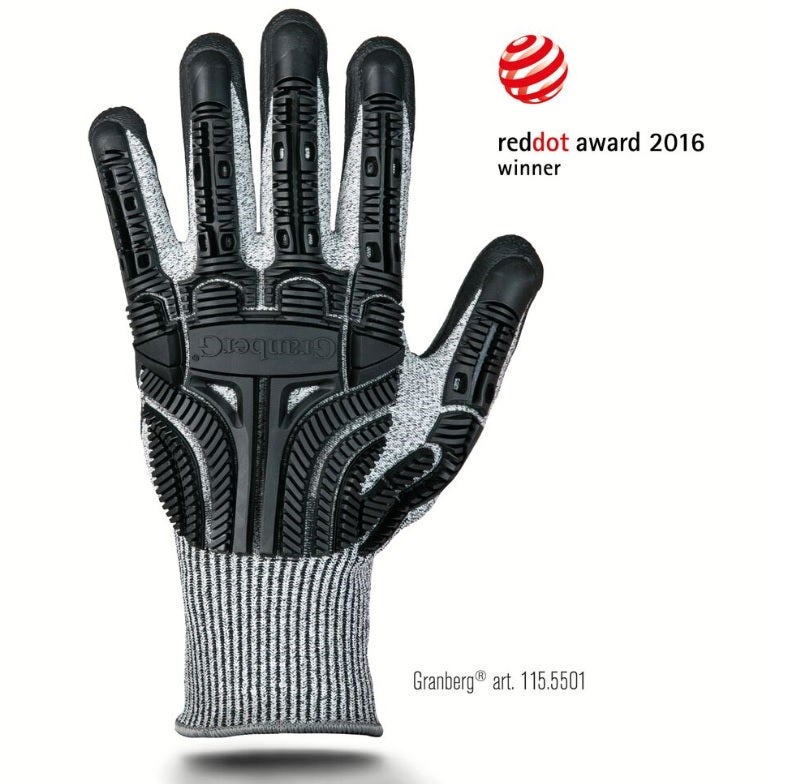 For the second year in a row, Granberg has won the international Red Dot Award, one of the most prestigious and important design awards in the world, for product design. As with the year before, the company has won with a new product in its line of impact and cut-resistant gloves.

"This design award is an important acknowledgment of our exceptional product development. Besides coming up with the top most quality and product performance, we push boundaries in design to give our customers the best there is in hand protection without compromising comfort, grip or functionality," says owner and CEO Ole Marthon Granberg. The glove is designed in-house by the company’s own designer/designer team, lead by assistant professor Virginijus Urbelis.

The entire product development process is always centred around the customers’ foremost needs.

"Winning once is a big achievement, but that our in-house product team has been able to maintain a level this high, and make us win this award two years in a row makes me in­credibly proud," continues Mr Granberg.

Last year, in 2015, Granberg was awarded the prestigious design award for two types of impact- and cut-resistant gloves: Granberg® 9001 and 9002. This year, Granberg is the Red Dot Award winner of 2016 for the new Granberg® 5501 glove. The award-winning glove features heavy-duty yet soft impact protection made of black TPU fixed to a cut-resistant Typhoon® glove, which provides 360° level five cut protection; the highest level of protection according to EN 388.

It is particularly suited to various applications in main­tenance, construction, oil and gas-related operations, the automotive industry, the engineering industry, where there is risk of impact due to recoils or falling objects, injuries from pinching and cuts from sharp edges and objects.

Granberg AS has manufactured work gloves since 1961 and has been the industry leader in Norway for a number of years serving the Norwegian market from its main office and warehouse located in Bjoa, Western Norway. In 2007 Granberg AS expanded onto Sweden to serve the European market from its warehouse hub in Falkenberg.

The Red Dot Award is an award where an international jury of experts chooses winners within a number of different categories. The products are evaluated according to criteria such as differentiation, aesthetics, durability, functionality and emotional content. Granberg will receive the Red Dot Award during the annual Red Dot Gala in Essen, Germany, on 4 July.

Granberg is delighted to announce that Sarah Bridge has been appointed as the company's Group...

Granberg AS, based in Vindafjord, Norway, has won the international industrial design award Red Dot...

The red heart is a symbol that Granberg has introduced on gloves with environmentally friendly...