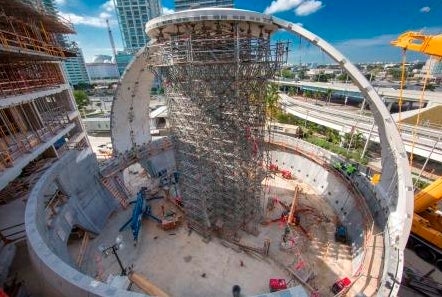 If you are one of the lucky visitors to the new and highly anticipated Miami Science Museum in 2016, you’ll be journeying to the great beyond while safely tucked inside a 250-seat planetarium constructed with the help of Layher materials.

Located in downtown Miami, US, the planetarium is the jewel of the new museum and structurally one of its biggest undertakings made possible by scaffolding.

The challenge: to assemble a planetarium sphere consisting of more than 30 puzzle-piece wedges, approximately 50,000lb each, for a structure weighing more than 1.6 million pounds. If the weight isn’t enough of an indication of the undertaking, consider the scale. Each panel measures approximately 48ft-long and 9ft-wide, with a taper to 3ft at the top where the panel meets the capstone. The capstone alone has a diameter of roughly 30ft.

Utilizing Layher HD shoring, Strickland Supplies from Jacksonville, Florida (working under Gate Precast and general contractor Skanska USA) first assembled a 50ft tower at what was to be the globe’s centre. The HD shoring frames, made of high-tensile steel, were expanded with Allround standard components to increase the girth of the tower to the appropriate size to access the full range of the sphere.

At the top, they assembled a working platform using Layher integrated decks and guardrails and set the precast dome cap to which the wedge pieces would be welded and secured. While the dome was designed to support itself structurally without a central tower, the shoring was necessary to provide support during assembly. Heavy-duty 20ft Allround® scaffold towers can each support loads of close to 150,000lb. Permissible loadings can be increased by using Layher reinforced base jacks and head jacks, additional bracing, and by joining standards with twin-wedge couplers.

Once the center piece was in place, the panels (precast by Gate Precast) were installed in a counter-clockwise rotation opposite one another to avoid placing unbalanced weight on the capstone. A 550t hydraulic crane was used to hoist the pieces into position. During two and a half weeks of intense round-the-clock work, the team worked to put panels into position during the day and weld them at night.

The tower underwent daily inspection to oversee the stability of the structure and safety of welders working from guardrails and spider lifts. Built-in safety features of the HD shoring include a safety-load-locking claw to ensure connection.