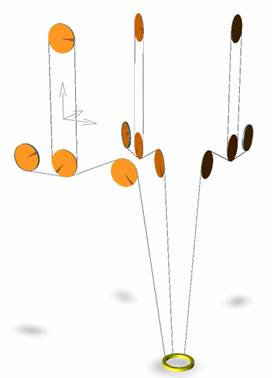 SimulationX 3.6 contains several new features as well as improvements and extensions of existing model libraries, strengthening its position as the software of choice for multi-domain simulation applications. SimulationX 3.6 has a number of improvements, such as improved user-friendliness and extensive library samples inspiring new modelling approaches. It comes with the possibility to run quasi-real-time simulations, allowing the user to run an interactive model in real time. A complete new hybrid powertrain library is available for ship propulsion also.

One of the most important enhancements in SimulationX 3.6 is the completely renewed 2D power transmission library for modelling wire systems such as tensioner systems. Tensioner systems are widely used in offshore operations and typically consist of a number of sheaves and a wire. Even though the tensioning system consists of simple mechanical components, the dynamics of such a system become quite complex due to flexibility and the mass of the wire, contact between wire and sheaves, friction in sheaves, and the highly nonlinear behavior of the gas accumulators. SimulationX facilitates modelling of detailed tensioning systems, coupling different domains such as mechanical, hydraulics, pneumatics and controls together in a multibody simulation. The new updated library for wire systems in SimulationX 3.6 allows the user to define planes in space, each one facilitating modelling of the wire system with pulleys and winches of different shapes, coupled together with elastic wires such as the quarter model of a riser tensioner system shown in the figure.

More information regarding Agito and SimulationX can be found by following the link to the company’s page. For more information about simulating tension systems contact Agito As and request technical note TNO-0008.

Image: A quarter model of a riser tensioner system modelled in SimulationX® 3.6. Photo: courtesy of Agito AS.