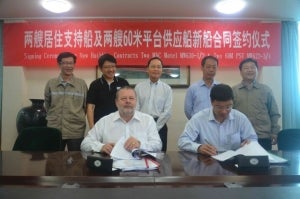 Marine Assets Corporation (MAC) is pleased to announce the recent signing of four new build OSV contracts with Fujian Mawei Ship Yard in SE China. Valued at $125m (Includes some other financial expenses), the contract will bring the current MAC order book to 25 vessels, due for delivery up until June 2016, ranging in size and specification from 60m PSVs up to 500-man flotels.

The recent signing was for two additional 60m PSVs, to follow on from the successful launch of the current two which will deliver in July. Two newly designed 89m MAC motels are also included, and feature 240 beds, crane and walk-to-work gangways. The motels will be the first OSVs to be delivered with the revolutionary OMPECO garbage convertor. This reduces garbage in volume by 70% and converts to inert sterile dust, thereby reducing one of the major headaches for operations.

Also to be installed is the EPIC POB monitoring system, which will electronically track personnel both on the vessel and across the gangway. This will enable the master to know the exact whereabouts of ship-based personal at any given time, an invaluable solution during an emergency muster.

Marine Assets Corporation (MAC) is please to announce the delivery of a specially designed anchor...