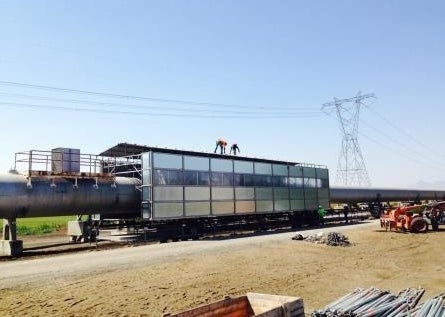 In what is the first of its kind in North America, Don Fry Scaffold Service (Don Fry) is bringing Layher products together in a unique approach to recoat sections of lead-based paint (LBP) lined pipelines that supply water to Oakland and San Francisco, California, US.

The project, headed by the East Bay Municipal Utility District (EBMUD), calls for recoating of sections of three large-diameter steel pipelines, known as the Mokelumne Aqueducts, which stem from the Pardee Reservoir and derive water from the Mokelumne River watershed, beginning at the Sierra Nevada Mountains.

The removal of LBP and recoating of approximately ten miles of aboveground pipeline began in 2001 with the ultimate goal of maintaining structural integrity of the lines while ensuring safety to workers and the environment.

Various subcontractors have worked on different sections of the lines, but what makes the Don Fry approach unique is a specialized design that encloses the pipe, preventing the exposure of lead-based materials, combined with the use of a manual cable system, known as a Tirfor®, to pull the scaffold housing along I-beam tracks set up on either side of the line.

The comparison is easy to see. Two rows of castors on either side work in conjunction with the Tirfor system to provide mobility. The system is operated by a simple lever and is capable of managing heavy loads such as the 10,000lb caged scaffold design composed of Layher Cassette Roof, walls of Protect System Scaffolding, and Allround® Scaffolding for the base structure.

Because improper removal of LBP can result in accidental releases with the possibility of endangering human health and the environment, safety was of the utmost concern in considering the design. Layher Protect System Scaffolding panels, lined with rubber seals, were chosen to create a water-tight positive pressure system, provide a barrier for hazardous materials, and protect against the wind and other elements. Clear panels provide light and a visibility from the outside.

"Georg Layher [Managing Director of Layher Holding] was impressed," says Darren Kincaid, Layher representative for Don Fry.
"He’s someone who has seen many application of Layher material, so that’s not easy to do. It speaks volumes to Don Fry Scaffold and their forward-thinking."

A crew of six Blastco workers perform the day-to-day field tasks that include sandblasting and removing lead-based paint beneath a tarp inside the structure, repainting with non-toxic paint, and dissembling and reassembling the 300ft of track as necessary to advance the housing.

Don Fry is expected to complete the final segment of the project in late June/early July 2015.